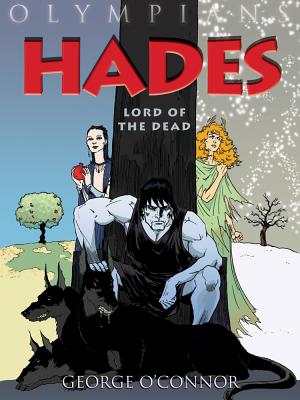 This is book number 4 in the Olympians series.

Hades is a Kirkus Reviews Best Children's Book of 2012

Praise for the Olympians series:

“An outstanding addition to a first-rate series.” —Kirkus, starred review

“O'Connor's brand of classical mythology for modern sensibilities serves as a good introduction to the gods and settings of the Greek myths.” —Publishers Weekly

“The writing is well done, the story line is interesting and moves quickly, the characters are colorful, and this adventure is exciting.” —Children's Literature

“O'Connor's artwork remains as strong as ever, especially in the glorious illustrations of the underworld.” —VOYA

“Atmospheric, with descriptions and images of the Underworld that are so captivating that readers will pore over those pages again and again. O'Connor's illustrations, filled with lots of color and haunting illuminations, are well suited to this exciting story and will attract even the most reluctant readers.” —School Library Journal