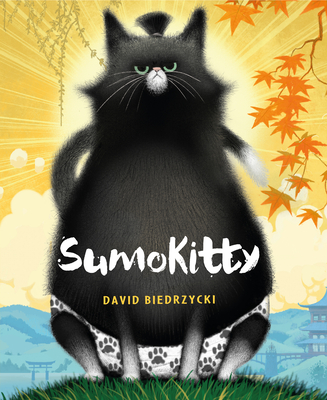 “SumoKitty is a humorous, enjoyable tale of a stray kitty who is taken in at a sumo wrestling training center. SumoKitty lives an easy life and becomes quite plump and a bit lazy, and because of this he is put back out as a stray. When he is given a second chance, he must train and learn the values and traditions of a sumo wrestler in order to be in good enough shape to catch mice and earn his keep at the sumo heya. This story is filled with elements of Japanese culture and vocabulary while teaching the importance of dedication and perseverance. A delightful read-aloud with an inspiring message and a humorous tone.”
— Colleen Shipman, Phoenix Books Essex, Essex Junction, VT

Watch out, mice! This cat is a sumo champion!

A stray kitty gets a job in a sumo stable, chasing mice in exchange for food. But when eating like a sumo wrestler slows our feline hero down, he realizes he must train like a wrestler, too. Through hard work and perseverance--and with a little help from a big buddy--SumoKitty is born! A funny and heartwarming story inspired by the Japanese saying "Fall down seven times, stand up eight."

David Biedrzycki is the author and illustrator of the Breaking News series, the Ace Lacewing, Bug Detective series, and the Me and My Dragon series. He has been creating illustrations for book publishers, advertising agencies, magazines, and design firms since 1980. His art has graced the cover of KidSoft magazine, New England Aquarium billboards and children's software packaging, such as "The Amazon Trail" and "Odell Down Under." David has collaborated with children's author Jerry Pallotta on The Beetle Alphabet Book, The Boat Alphabet Book, and The Freshwater Alphabet Book. He grew up in Pennsylvania and now lives in Massachusetts with his wife and three children.

A furry feline has sumo-sized aspirations in this Japan-set tale. A stray black-and-white kitty with round emerald eyes watches a sumo match from afar and then follows a group of rikishi back to the heya, where the pickings are good. Caught by the manager of the training center, the feline narrator is offered a place to stay: "Kuma is afraid of mice. Can you get rid of them?" The arrangement hits a snag when the Kitty's weight gain affects its efficiency as a mouser and it is turned out of the heya. Dejected, Kitty gives up until Kuma quietly offers encouragement: "The cat that does not cry catches the mouse." Kuma and Kitty are shown in action side by side, showcasing their parallel use of sumo moves. Japanese terms are defined, with pronunciation guides, next to the text: "shiko (shee-koh): leg stomp." While Kitty finds the strength to reclaim its place and is deemed SumoKitty, Kuma now must face his own fear of mice in order to overcome his biggest sumo opponent. Kitty's straightforward narration is set against comically charming illustrations that evoke scenes from classic Japanese woodblock art. Extensive research is expressed in both the inclusion of Japanese terms and the detailed illustrations. However, the inclusion of the Indian spiritual practice of yoga as part of the rikishi's training regimen seems unlikely given sumo's own deeply traditional and spiritual nature. SumoKitty's antics delight despite a muffed cultural detail.
—Kirkus Reviews