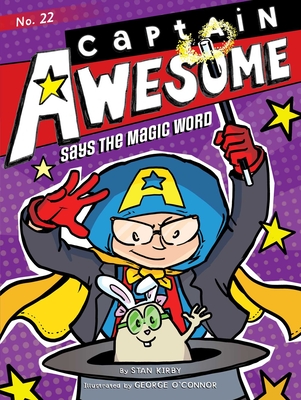 This is book number 22 in the Captain Awesome series.

After seeing a real-live magic show, Eugene has decided he wants to become a magician. So he studies magic tricks and practices them on anyone he can: his best friends, his parents, and even his baby sister. Then his teacher announces that her students will all be sharing something new they’ve learned recently, and Eugene knows this is the perfect chance to show his skills. For his biggest trick yet, Eugene will make the class pet hamster, Turbo, disappear! But when Eugene says the magic word, Turbo actually does disappear. Did Eugene’s magic really work? And where is Turbo?

With easy-to-read language and illustrations on almost every page, the Captain Awesome chapter books are perfect for beginning readers!

Stan Kirby tied a beach towel around his neck and became Super Commander Beach Boy when he was six years old. When Stan’s not creating the awesome adventures of Captain Awesome, he loves reading comic books, eating okra, and hang gliding (but not at the same time).

George O’Connor is the creator of the New York Times bestselling graphic novel series Olympians, in addition to serving as the illustrator of the Captain Awesome series. He is also the author and illustrator of the picture books Kapow!, Ker-splash, and If I Had a Triceratops. He resides in his secret Brooklyn, New York, hideout, where he uses his amazing artistic powers to strike fear in the hearts of bad guys everywhere!