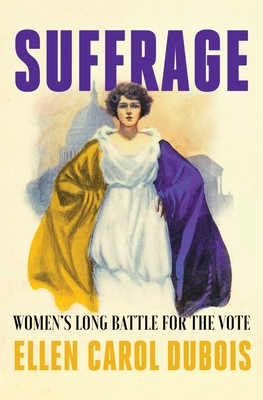 Honoring the 100th anniversary of the 19th amendment to the Constitution, this exciting history explores the full scope of the movement to win the vote for women through portraits of its bold leaders and devoted activists.

Distinguished historian Ellen Carol DuBois begins in the pre-Civil War years with foremothers Lucretia Mott, Elizabeth Cady Stanton, Susan B. Anthony, and Sojourner Truth as she explores the links of the woman suffrage movement to the abolition of slavery. After the Civil War, Congress granted freed African American men the right to vote but not white and African American women, a crushing disappointment. DuBois shows how suffrage leaders persevered through the Jim Crow years into the reform era of Progressivism. She introduces new champions Carrie Chapman Catt and Alice Paul, who brought the fight into the 20th century, and she shows how African American women, led by Ida B. Wells-Barnett, demanded voting rights even as white suffragists ignored them.

DuBois explains how suffragists built a determined coalition of moderate lobbyists and radical demonstrators in forging a strategy of winning voting rights in crucial states to set the stage for securing suffrage for all American women in the Constitution. In vivid prose DuBois describes suffragists’ final victories in Congress and state legislatures, culminating in the last, most difficult ratification, in Tennessee.

Suffrage: Women’s Long Battle for the Vote is sure to become the authoritative account of one of the great episodes in the history of American democracy.

Ellen Carol DuBois is Distinguished Research Professor in the History Department of UCLA. She is the author of numerous books on the history of woman suffrage in the US. She is the coauthor, with Lynn Dumenil, of the leading textbook in US women’s history, Through Women’s Eyes: An American History with Documents and coeditor, with Vicki Ruiz, of Unequal Sisters: In Inclusive Reader in US Women’s History.

“Ellen DuBois tells us the long drama of women’s fight for the vote, without privileging polite lobbying over radical disobedience—or vice versa. In so doing, she gives us the gift of a full range of tactics now, and also the understanding that failing to vote is a betrayal of our foremothers and ourselves.”
— Gloria Steinem

“This is a great American story, beautifully told.  Ellen DuBois enables us to appreciate the drama of the long battle for women's suffrage and the heroism of many of its advocates, as well as the movement's imperfections.   At a time when many of our constitutional rights are under assault, this is an especially relevant piece of our national history.”
— Eric Foner, author of The Second Founding: How the Civil War and Reconstruction Remade the Constitution

"Compelling. . . . The complex circumstances of the suffrage fight are difficult to disentangle and judge fairly; DuBois, an academic trailblazer in women’s history, brings vast knowledge and insight to the task. This accessible new volume provides an indispensable resource as we celebrate the women’s suffrage centennial."
— Ellen Chesler

“This book is a treasure! A wealth of material is gathered here on behalf of the stirring, seventy year struggle for the political enfranchisement of American women. Others have written about it  before, but none as thrillingly, as freshly, and as comprehensively as does Ellen Dubois in this book.  Suffrage deserves a permanent place on the ever-growing  shelf of distinguished feminist history."
— Vivian Gornick

“The complex circumstances of the suffrage fight are difficult to disentangle and judge fairly; DuBois, an academic trailblazer in women’s history, brings vast knowledge and insight to the task. This accessible new volume provides an indispensable resource as we celebrate the women’s suffrage centennial.”
— Ellen Chesler

"Suffrage takes us along the troubled road to votes for women, guided by Ellen DuBois, one of the best historians of the movement. Getting to a woman's suffrage amendment in 1920 was no straight path, and DuBois courageously wades into the fraught politics of pro- and anti-suffrage, chronicles moments of hope and despair, and turns deep research into a page-turner of a saga. This is no simple story about heroes—DuBois is honest about how racism limited the movement's scope and its influence. Still, the women of Suffrage teach essential lessons for our own time about how vision, vigilance, and risk-taking have always been the life-blood of the nation's best ideals. Their work of ensuring women's equality, DuBois makes plain, is not yet done."
— Martha S. Jones, author of All Bound Up Together: The Woman Question in African American Public Culture, 1830-1900.

“Suffrage reads like an exciting novel. Ellen DuBois presents her well-researched history of women’s long battle for the vote through superb story-telling, in which the major personalities in the struggle to enfranchise women come alive in all their complexity. Though we know the story will end in the victory of the 19th Amendment, Suffrage is a page-turner.”
— Lillian Faderman, author of Odd Girls and Twilight Lovers and The Gay Revolution

“Comprehensive and well-paced. . . . DuBois rightly focuses on the colorful personalities that defined the distinct eras of suffragism, and effectively marshals a wealth of source material. This thorough, evenhanded presentation offers valuable lessons for readers interested in women’s rights and the history of progressive activism in America.”
— Publishers Weekly

"DuBois meticulously and vibrantly chronicles every phase of this arduous, complicated, cross-country battle. . . . [She] breaks through the dull casings that have calcified around the best-known suffragists, including Susan B. Anthony, and brings them forward as complex and compelling individuals."
— Booklist

"What is most provocative about this book, however, is how contemporary it feels. It’s shocking to read about women being arrested merely for picketing, or attacked while marching peacefully down Pennsylvania Avenue — but maybe not that shocking."
— Betty J. Cotter

"Timely and thorough, Dubois’ book analyzes the suffrage movement with passion and perspective, inspired by fervor for freedom."
— Jay Strafford