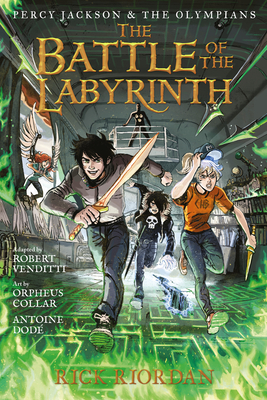 An exciting graphic novel adaptation of the fourth adventure in the #1 New York Times best-selling series Percy Jackson and the Olympians. Time is running out as war between the Olympians and the evil Titan lord Kronos draws near.
Even the safe haven of Camp Half Blood grows more vulnerable by the minute as Kronos’s army prepares to invade its once impenetrable borders. To stop them, Percy and his demigod friends will set out on a quest through the Labyrinth—a sprawling underground world with stunning surprises at every turn.
Full of humor, heart-pounding action, and stunning illustrations, this thrilling adventure is a must-read for Percy fans!

Rick Riordan, dubbed “storyteller of the gods” by Publishers Weekly, is the author of five #1 New York Times best-selling middle grade series with millions of copies sold throughout the world: Percy Jackson and the Olympians, The Heroes of Olympus, and the Trials of Apollo, based on Greek and Roman mythology; the Kane Chronicles, based on Ancient Egyptian mythology; and Magnus Chase and the Gods of Asgard, based on Norse mythology. Rick collaborated with illustrator John Rocco on two #1 New York Times best-selling collections of Greek myths for the whole family: Percy Jackson’s Greek Gods and Percy Jackson’s Greek Heroes. Rick is also the publisher of an imprint at Disney-Hyperion, Rick Riordan Presents, dedicated to finding other authors of highly entertaining fiction based on world cultures and mythologies. He lives in Boston, Massachusetts with his wife and two sons. Follow him on Twitter at @RickRiordan.

Antoine Dodé is an award-winning illustrator for his graphic novel work, including Armelle et l'oiseau. He studied illustration in Brussels at St. Luc Institute and has illustrated numerous comics and graphic novels, including the miniseries The Crow, Curare written by James O’Barr.