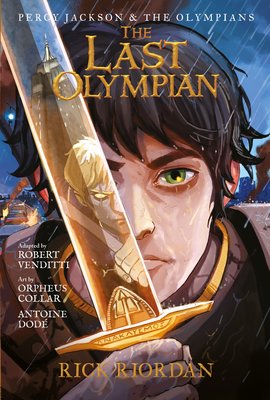 All year the half-bloods have been preparing for battle against the Titans, knowing the odds of victory are grim. Krono's army is stronger than ever, and with every god and half-blood he recruits, the evil Titan's power only grows. While the Olympians struggle to contain the rampaging monster Typhon, Kronos begins his advance on New York City, where Mount Olympus stands virtually unguarded. Now it's up to Percy Jackson and an army of young demigods to stop the Lord of Time.
In this epic finale to the New York Times best-selling Percy Jackson and the Olympians series, the long-awaited prophecy surrounding Percy's sixteenth birthday unfolds. As the battle for Western civilization rages on the streets of Manhattan, Percy faces a terrifying suspicion that he may be fighting against his own fate. Relive the showdown in this all new graphic novel adaptation.

Rick Riordan, dubbed "storyteller of the gods" by Publishers Weekly, is the author of five New York Times #1 best-selling series, including Magnus Chase and the Gods of Asgard, based on Norse myths. He is best known for his Percy Jackson and the Olympian books, which bring Greek mythology to life for contemporary readers. He expanded on that series with two more: the Heroes of Olympus, and the Trials of Apollo, which cleverly combine Greek and Roman gods and heroes with his beloved modern characters. Rick also tackled the ancient Egyptian gods in the magic-filled Kane Chronicles trilogy. Millions of fans across the globe have enjoyed his fast-paced and funny quest adventures as well as his two #1 best-selling myth collections, Percy Jackson's Greek Gods and Percy Jackson's Greek Heroes. Rick is also the publisher of Rick Riordan Presents, an imprint dedicated to publishing highly entertaining books by authors from underrepresented cultures and backgrounds, to allow them to tell their own stories inspired by the mythology, folklore, and culture of their heritage. He lives in Boston, Massachusetts, with his wife and two sons. For more information, go to RickRiordan.com, or follow him on Twitter @camphalfblood.
Robert Venditti is a New York Times best-selling author whose characters and concepts have been adapted to both film and television. He has written critically acclaimed comic book series for Valiant Entertainment and DC Comics, as well as the graphic novel adaptations of the worldwide best-selling series Percy Jackson and the Olympians, the Heroes of Olympus, and Blue Bloods. He is also the author of the award-winning Miles Taylor and the Golden Cape series for young readers. He lives in Atlanta, Georgia. Visit him at RobertVenditti.com.


Orpheus Collar is a New York Times best-selling graphic novelist and illustrator. He adapted, illustrated, and colored the Kane Chronicle graphic novel series. He also drew layouts for The Lightning Thief, The Graphic Novel and has contributed his coloring skills to numerous titles, including The Lost Hero, The Graphic Novel; The Amazing Spider-Man and Ultimate X-Men. Orpheus lives in Los Angeles, California. Learn more at Orpheusartist.com.
Antoine Dodé is an award-winning illustrator for his graphic novel work, including Armelle et l'oiseau. He studied illustration in Brussels at St. Luc Institute and has illustrated numerous comics and graphic novels, including the miniseries The Crow, Curare written by James O'Barr.