Zeus and the Thunderbolt of Doom (Heroes in Training #1) (Paperback) 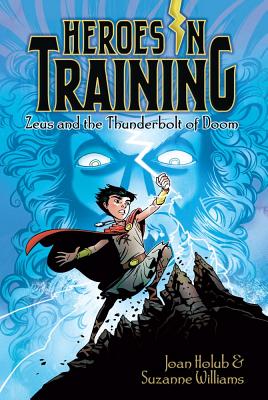 This is book number 1 in the Heroes in Training series.

After pulling a magical thunderbolt from a stone, ten-year-old Zeus goes on the adventure of a lifetime in this thrilling start to a brand-new series!

The terrible Titans—merciless giants who enjoy snacking on humans—have dominated the earth and put the world into chaos. But their rule is about to be put to the test as a group of young Olympians discover their powers and prepare to righteously rule the universe....

Ten-year-old Zeus is mystified (and super-annoyed) by the fact that he keeps getting hit by lightening. Every. Single. Year. He also longs for adventure, as he has never been far from the cave where he grew up.

Zeus gets his wish—and a lot more than he bargained for—when he is kidnapped by dangerous, giant Titans! In self-defense, Zeus grabs the first thing he sees—an actual thunderbolt he pulls from a stone that is covered in mysterious markings. Zeus is the only one who can decipher the markings, and sets off on a quest to rescue his fellow Olympians from the evil Cronus. Armed with his trusty thunderbolt (named Bolt, of course), Zeus is on an adventure of a lifetime—and a journey to fulfill his destiny as King of the Gods.

Joan Holub has authored and/or illustrated over 140 children’s books, including the Goddess Girls series, the Heroes in Training series, the New York Times bestselling picture book Mighty Dads (illustrated by James Dean), and Little Red Writing (illustrated by Melissa Sweet). She lives in North Carolina and is online at JoanHolub.com.

Suzanne Williams is a former elementary school librarian and the author of over seventy books for children, including the award-winning picture books Library Lil (illustrated by Steven Kellogg) and My Dog Never Says Please (illustrated by Tedd Arnold), and several chapter book and middle grade series. She also coauthors the Goddess Girls and Thunder Girls series with the fantastic Joan Holub. Visit her at Suzanne-Williams.com.

Craig Phillips has been creating cover art and drawings for books, comics, and magazines for nearly two decades. He is most at home working on tales about myth and magic. His latest book—Giants, Trolls, Witches, Beasts: Ten Tales from the Deep, Dark Woods—is a 200-page graphic novel about just that! It will be in stores in May 2017. When he is not drawing and writing, he likes to swim in the lakes and walk in the forests and mountains of New Zealand. Visit him at CraigPhillips.com.au.