Who Is Colin Kaepernick? (Who HQ Now) (Paperback) 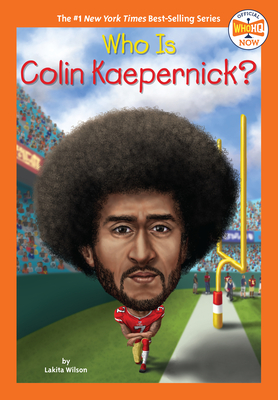 Learn about the inspiring life and career of professional football player and activist Colin Kaepernick in the new Who HQ Now format featuring newsmakers and trending topics.

On August 14, 2016, NFL quarterback Colin Kaepernick began a protest when he refused to stand for the national anthem. He wanted to make a statement about the oppression of people of color in the United States after he had spent a summer speaking out against police brutality. After playing professional football for six seasons, that would become Colin Kaepernick's last season in the NFL, but he would go on to become one of the most prominent activists of today. Colin believed that speaking out against racism was far bigger than football, and other athletes agreed with him. Today, hundreds of athletes -- from high schools to professional teams -- still kneel during the national anthem to protest the treatment of people of color in America.

Discover more about Colin Kaepernick's story in this addition to the New York Times bestselling series.

Lakita Wilson is a children's book author who has been awarded a SCBWI’s On-the-Verge Emerging Voices Award. She is an advocate for diverse and inclusive literature for kids. Lakita is also the author of What Is Black Lives Matter? in the Who HQ series.