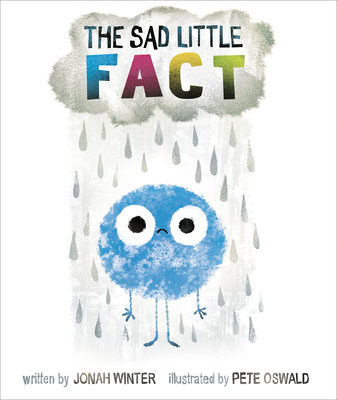 There once was a fact who could not lie.

But no one believed him.

When the Authorities lock the sad little fact away, along with other facts, the world goes dark. But facts are stubborn things. With the help of a few skillful fact finders, they make a daring escape and bring truth back to brighten the world. Because after all, "a fact is a fact" and that's that!

Truth be told, this spare, ingenious story reads like a modern-day parable. Bestselling author, Jonah Winter, and the #1 New York Times bestselling illustrator of The Good Egg, Pete Oswald, pair together to remind us of the importance of honesty and truth during a time of lies and fake news.

Pete Oswald is the New York Times bestselling illustrator of The Good Egg, as well as The Bad Seed, which was an Amazon Best Children's Book of the Year in 2017 and an indie favorite. He has worked as a character designer, a concept artist, and an art director on many popular films including Madagascar 2, Cloudy with a Chance of Meatballs, and Angry Birds. He has several picture books in the works, including The Good Egg, a sequel to The Bad Seed. .

A TIME MAGAZINE BEST CHILDREN'S BOOKS OF THE YEAR

“A humorous and inviting story that just begs to be read aloud.... A modern day parable on the importance of honesty in life.” —The Advocate