Trouble According to Humphrey (Paperback) 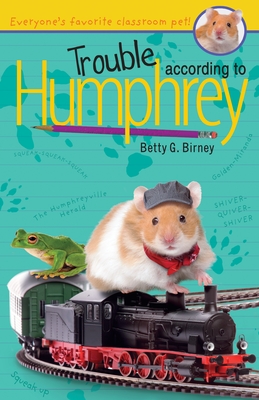 This is book number 3 in the Humphrey series.

The third book in the beloved and award-winning school hamster series!

Humphrey loves to solve problems for his classmates in Room 26, but he never meant to create one! Golden-Miranda, one of his favorite students, gets blamed when Humphrey is caught outside of his cage while she’s in charge. Since no one knows about his lock-that-doesn’t-lock, he can’t exactly squeak up to defend her. Humphrey really has his paws full when Don’t-Complain- Mandy-Payne and her family stir up more big trouble. Humphrey manages to help Pay-Attention-Art and Sit-Still-Seth and even survives a trip to the vet, but can he clear Miranda’s name without giving up his freedom forever?

Look for all twelve of Humphrey's adventures!

Betty G. Birney has won many awards for writing for television, including an Emmy, three Humanitas Prizes, and a Writers Guild of America Award, and she won the Christopher Award for Friendship According to Humphrey. In addition to the Humphrey series, she is the author of The Seven Wonders of Sassafrass Springs and The Princess and the Peabody's. She grew up in St. Louis, Missouri, where her parents grew up as neighbors on Humphrey Street. Her website, bettybirney.com, is full of fun Humphrey activities and information.

“Fans as well as readers new to the series will be entertained by Humphrey’s escapes, which are related in a lively, first-person narrative, laced with humor, heart, and hamster facts.”—Booklist