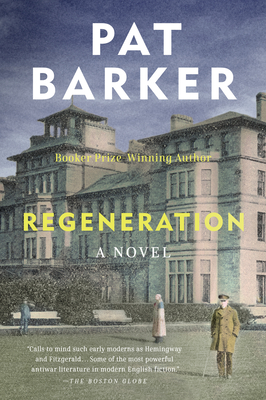 “Calls to mind such early moderns as Hemingway and Fitzgerald...Some of the most powerful antiwar literature in modern English fiction.”—The Boston Globe

The first book of the Regeneration Trilogy—a Booker Prize nominee and one of Entertainment Weekly’s 100 All-Time Greatest Novels.

In 1917 Siegfried Sasson, noted poet and decorated war hero, publicly refused to continue serving as a British officer in World War I. His reason: the war was a senseless slaughter. He was officially classified "mentally unsound" and sent to Craiglockhart War Hospital. There a brilliant psychiatrist, Dr. William Rivers, set about restoring Sassoon’s “sanity” and sending him back to the trenches. This novel tells what happened as only a novel can. It is a war saga in which not a shot is fired. It is a story of a battle for a man's mind in which only the reader can decide who is the victor, who the vanquished, and who the victim.

One of the most amazing feats of fiction of our time, Regeneration has been hailed by critics across the globe.  More than one hundred years since World War I, this book is as timely and relevant as ever.

Pat Barker is the author of sixteen novels, beginning with her working-class masterpiece Union Street in 1982. Her Regeneration Trilogy novels, set in the First World War, were awarded the Booker Prize and praised as some of the greatest historical novels in British literature. Her latest novels are The Silence of the Girls, which was shortlisted for the Women's Prize for Fiction and the Gordon Burn Prize in the UK and won the Independent Bookshop Award in 2019, and The Women of Troy. She was made a CBE (Commander of the Order of the British Empire) in 2000. She lives in Durham, England.

“Extremely accomplished and intelligent... Barker is adept at dramatizing moral dilemmas that have no easy answers.”—Entertainment Weekly

“One of the most deserving winners of the prestigious Booker fiction prize in recent years.”—The New York Review of Books

“Pat Barker makes both her fictional and her real characters complex and credible....Best of all, she attends to the moral nuances of a time when it was hard to distinguish the lesser insanities from the greater ones.”—Los Angeles Times Book Review

“It has been Pat Barker’s accomplishment to enlarge the scope of the contemporary English novel....Regeneration is an inspiring book that balances conscience and thevitality of change against a collapsing world.”—The New Yorker