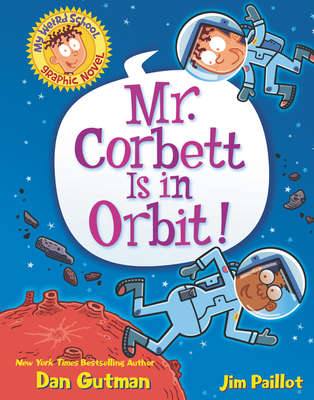 In this first book, A.J. and his friends at Ella Mentry School are headed on a field trip to NASA headquarters. But their tour guide, Mr. Corbett, is a total space cadet! And what happens when A.J. accidentally launches the whole class into outer space?!

Full of visual gags, space aliens, and hilarious full-color illustrations, this is the weirdest graphic novel in the history of the world!

With more than 30 million books sold, the My Weird School series really gets kids reading!

“Gutman’s trademark punning panache is instantly recognizable alongside longtime series illustrator Paillot’s vibrant full-color cartoon art, giving this just the right feel of being both new and familiar. Established fans should be at home here, and the story stands alone well enough to entice new readers…Catnip for those who relish silliness.” — Kirkus Reviews

“Barely a panel or clever aside goes by without a chuckle or belly laugh. Fans will be absolutely delighted and newcomers no less so.” — Booklist